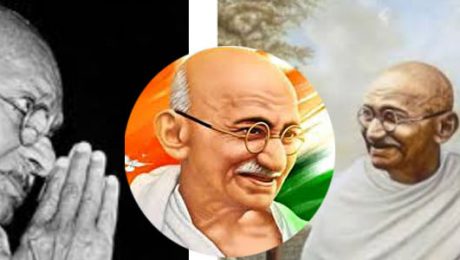 On the waves of global protests against racism and discrimination, a iconoclastic storm rages. Statues of persons symbolizing racism and discrimination are knocked down (unlocking statues) or daubed. A statue that must now also be deflowered is that of Mahatma Gandhi. In a number of African countries, protests have been taking place for several years against the presence of statues of Gandhi because of his racist statements about Africans. In England, too, there are now activists calling for his statues to be removed. In the Netherlands, the statue of Gandhi in Amsterdam-South (Churchill Avenue) was daubed with red paint last week. On the pedestal is written ‘racist’ and the figures are 1312. These numbers represent the letters A-C-A-B, all cops are bastards. That Gandhi is associated with these figures is highly remarkable since he has never used violence.

Gandhi as racist
Mahatma Gandhi (October 2, 1869–January 30, 1948) is regarded internationally as an icon of nonviolent resistance to racism, discrimination and colonialism. Many human rights fighters found and find their inspiration in Gandhi and his life mission, such as Martin Luther King Jr. and Nelson Mandela. What is the racist objection against Gandhi? Gandhi regarded the Africans in South Africa as uncivilized, dirty and alive as animals. As an Indian, he couldn’t have had the same treatment as a African. Gandhi considered Indians superior to black South Africans, following the European colonials, and he advised Indians to avoid contact with black South Africans. Gandhi made these statements during his stay in Natal in South Africa between 1893 and 1915. 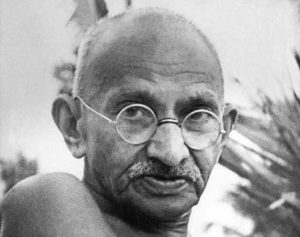 Gandhi’s racist statements became known when a biography of him was published by Joseph Lelyveld, former editor-in-chief of The New York Times and admirer of Gandhi: Great Soul: Mahatma Gandhi and His Struggle with India (2011). Where Gandhi is almost a saint in India, Lelyveld’s biography meant a desecration or demythification of the Great Soul. Lelyveld’s biography contains many asides in which he portrays him as a bisexual, racist, vainly, sourpuss and manipulator. The reviews that subsequently appeared in British newspapers have mainly magnified these ‘asides’ to the great displeasure of the author according to interviews with him, because years later Gandhi distanced himself from his racist statements. Not surprisingly, in India, the reviews in British newspapers about the Gandhi’s biography were met with great shock. In the eyes of Indians, this biography was a desecration of someone who now has the status of a saint in India.
Five years later, another publication was published that addressed Gandhi’s racism, but it did not receive widespread attention in the press as joseph Lelyveld’s in 2011. Two Indo-South African scientists Ashwin Desai and Goolam Vahed published their The South African Gandhi: Stretcher-Bearer of Empirein 2016. They, too, describe Gandhi’s racism during his South African years.
I do not rule out the fact that Gandhi, in his twenties, has taken over the narrative of racist white supremacists about the inferiority of the black race with his statements about black South Africans during his time in Natal. This, for my part, does not imply any condoning of his statements.

The spirit of the Taliban within the anti-racism movement
I can’t escape the impression that certain (extremist) activists are now overcome by blind anger and that common sense and nuance are far to be found in them. It would mean speeding up the search for anyone who has a racist slur to refer to the scrapheap of history. Historical personalities are not saints and their legacy is always inconsistent. This also applies to institutions such as the Church.

I explain this inconsistency below with a number of examples. Enlightenment philosophers from the eighteenth century such as Voltaire and Montesquieu symbolise everything the Enlightenment stood for with its pleas for freedom of religion, separation of church and state and equality of man. Universal human rights are for an important part based on the ideas of these enlightenment philosophers. Montesquieu owes us the political establishment of democratic states based on his theory of the separation of powers, the Trias Politica. However, Voltaire and Montesquieu expressed racist and anti-Semitic views. This also applies to many other enlightenment philosophers such as Immanuel Kant and DavidHume. These philosophers later distanced themselves from their racist views. Does it mean that, despite the change in their thinking, we will have to put a spell on their entire intellectual legacy in 2020? These philosophers proclaimed views that are totally unacceptable today, but they lived in a different time and in some ways had different visions of good and evil.

What about Christianity, Christian institutions and symbols? Should churches be daubed and Christian symbols removed from public life because Christianity legitimized the enslavement of Africans by referring to ‘the curse of Cham’? [Cham was one of Noah’s sons, who was cursed by his father]. Within Christianity, Africans were seen as descendants of Cham through all kinds of questionable reasoning. It was not until the nineteenth century that the Vatican would speak out against slavery. Just as Islam is not a retarded religion because of extremist Islamic fundamentalism, so the Christian Church is not a paedophile movement because of the many cases of child abuse. Such views would be short-sighted. 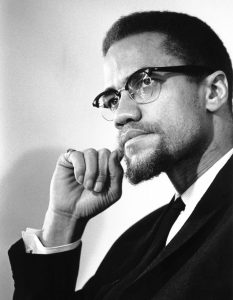 To stay with the present time, Malcolm X (1925-1965) still stands today as an icon of black protest in the United States. At some stage in his life, however, he was also a racist (whites supremacists are white devils, interracial marriages affect the purity of the black race), an anti-Semite (Jews are leeches and are the worst of the white devils), a homophobe and a sexist (women are subordinate to men). Malcom X later admitted that he was wrong about his statements about whites and Jews. Should we continue to regard him as a racist and anti-Semite? I am aware of malcolm x’s above statements, but he nevertheless remains to me above all someone who gave Afro-Americans dignity and cultural self-awareness. Should we also call for a ban on Michael Jackson’s music on radio and television because of his child abuse? By no means, he remains to me the King of pop but At the same time I realize that the flip side of his great contribution to entertainment has also been the abuse of children.

What I want to make clear with these examples is that we should not use the extreme position or faux pas in the past of individuals and an institution like the Church as a stall cover for their entire (spiritual, intellectual, artistic et cetera) legacy. We need to look at the inconsistencies of individuals and institutions and ask ourselves how they relate to their moral message. People and situations are complex and going down with one aspect leads to stereotyping and phrases like all whites are supremacists and all blacks are lazy. With such an attitude, we are entering a spiral of radicalism rather than engaging in constructive dialogue. Whoever we grab by the ankles and keep their heads down, there will always be things rolling out of the pocket that can’t bear the daylight. Gandhi is no exception for me in that respect. The enlightenment philosophers, Gandhi, Malcolm X and with them many others are not perfect. No one is. In blind rage unlocking and defacing statues are expressions of a Taliban-like state of mind and i consider the hijacking of a legitimate movement by extremists. On the important issue that is now at stake, we must not take the wrong people’s measure, but rather focus on combating racism and discrimination in the here and now!